I love cabbage rolls. I especially like those from Lebanese steakhouses here in Northeastern Oklahoma. (Shout out to my friend Greg Gawey).

I can and have made them myself. Frankly, they are tedious and you need to make large batches to justify the work.

Stuffed peppers are not the same thing, but the flavors are very similar and just as comforting. I do not pretend to offer an authentic spice blend in this recipe. Very few Lebanese cooks, home or commercial, will tell all. The internet has cabbage rolls, of course. Even Martha Stewart has posted one.

When you read those recipes, you find there are as many different ones as there are regions. Some that look tasty call for things like 7 spice. When I looked that up, I found a startling diverse set of recipes for the spice. I gave up. Instead I have reverse engineered a spice blend. The proportion on the spices can and should be adjusted by you to suit your own taste, as should the amount you use in the meat.

This recipe is based on 4 to 6 large bell peppers. Figure 1 or 2 halves per person depending on the size of the peppers.

For the spice blend: Mix all the spices in a small single bowl and set aside.

For the peppers: If using long peppers find two spots opposite each other where the peppers can sit without rolling. Slice horizontally in half. Remove the seed and pith. Using the point of a small knife make two small holes in the bottom of each pepper for drainage later. 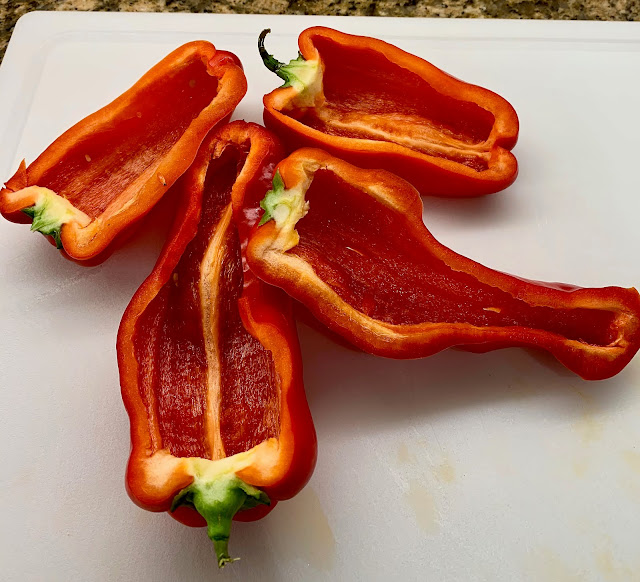 If using the round and blocky type of peppers, slice the stem end of the pepper off just as the sides start to go down.

Seed the peppers and remove the pith. If necessary, take a thin slice off the bottom lobes to allow the pepper to sit squarely. Again, make two small slits in the bottom of each pepper.

For the stuffing: In a bowl, add the meat, the rice, the minced garlic, the minced onion, and two teaspoons of the spice blend. Reserve any excess spice. Mix the ingredients well with one hand and set aside.

For the sauce: Halve the cherry tomatoes and add to the bowl of a food processor or blender. Alternatively, if you have a stick blender, put the tomatoes in a regular tall side bowl. Add the tomato paste. 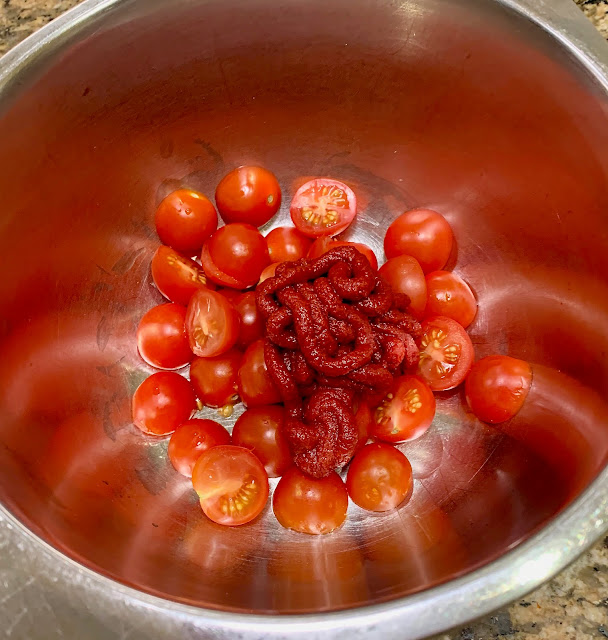 The cherry tomatoes add a freshness. The tomato paste adds intense flavor and body. Add the garlic, as much of the remaining spice as you desire, and the water. Blend or process until the mixture is smooth and no chunks of tomato remain. 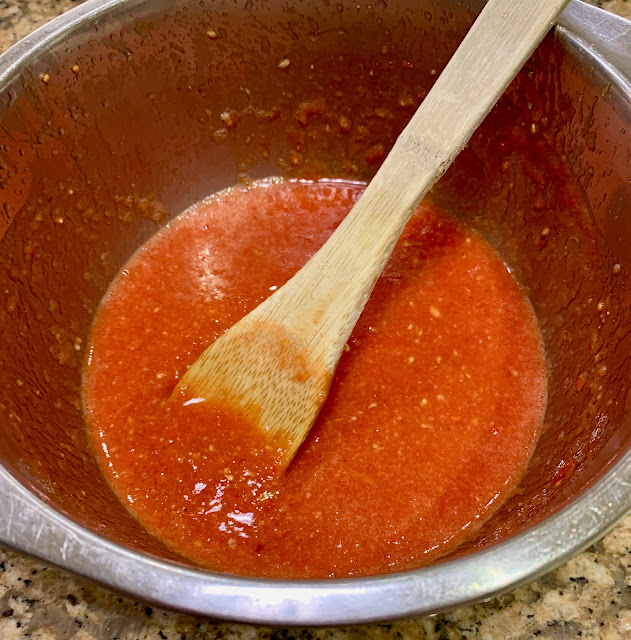 Pre-heat the oven to 350. Be sure the rack is in the middle.

Stuff the peppers loosely with  the stuffing mixture. 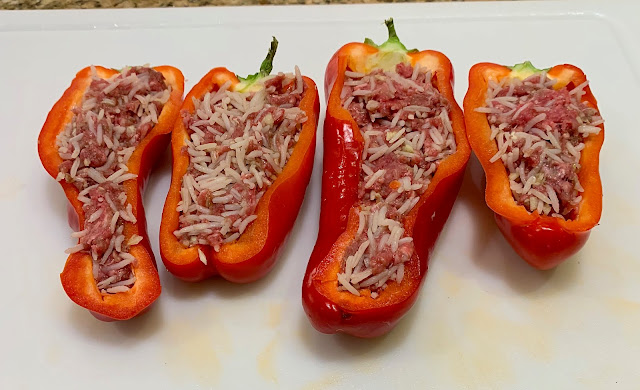 Use the smallest baking dish in which the peppers fit comfortably. Pour your sauce into the dish and place your peppers in the dish. Put one spoonful of the sauce on the top of each pepper. Bake until the filling reaches 145 degrees and the peppers have softened. Usually 25 minutes to 35 minutes. (Note: The long flat peppers cook more quickly.)

Use a slotted spoon and remove the peppers one by one. Hover each pepper over the baking dish to allow juices to drain. Place the peppers on your serving dish. Stir the remaining sauce well to remove any bits stuck to the bottom of the dish. If necessary add a bit of water to he sauce if too dried. Spoon sauce over the peppers for service. Side dishes can include tabouli, green beans stewed in tomatoes, and or a cucumber and tomato salad.
Posted by randolph stainer at 3:25 PM