On Thursday, it happened. I decided I needed bacon. I tried to quell the urge with Friday night bacon, lettuce, and tomato sandwiches. Not enough. So today I embarked on a task. Tonight's special?
Mushroom Bacon Ravioli.

For the pasta, I use a variation of Mario Batali's pasta recipe available on the internet. I use one egg for every cup of semolina flour, but I add a little olive oil, and some grated nutmeg to the egg. I also use the food processor rather than make the flour mound on my counter. I start the dry ingredients whirling in the processor and drizzle in the wet goods until the dough reaches the right "sandy' appearance. The I let it whirl and knead until it forms a good dough ball. I rest that wrapped in cling film in the refrigerator for at least 30 minutes before I begin to make the dough with my Kitchen Aid pasta attachment. Our mixer is at least 30 years old and still going strong. I wish I could say the same about other appliances.

While the dough rests I chop and saute the ingredients for the filling. The picture shows some of those. 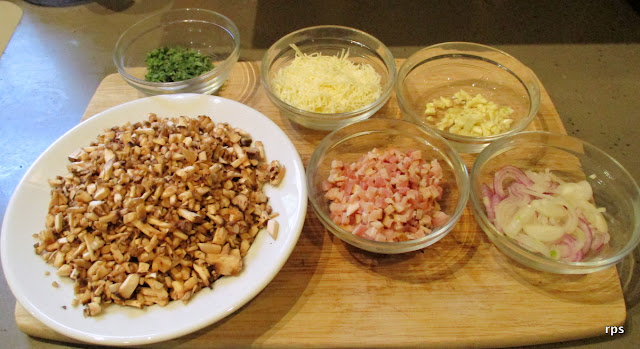 Once the dough is ready, I cut circles and stuff the filling. The trick, every time, is to avoid trying to stuff too much into the circle. You want a good seal and enough room to work as much of the air out of the center as possible. 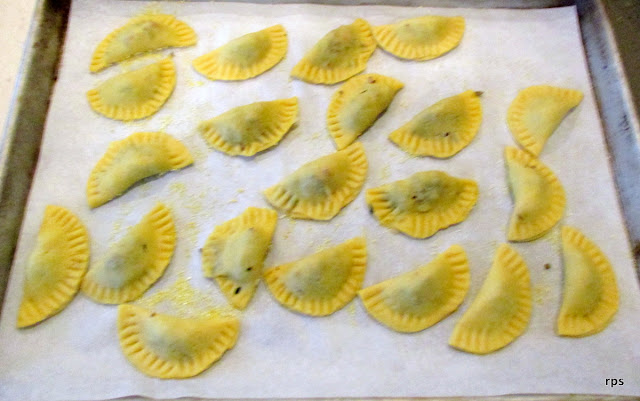 After you complete the ravioli, cover them with a moist towel.

Sort out your preferred topping - Marcella Hazen's Five Ingredient sauce, Garlic and Sage Brown Butter sauce, or some other favorite.

Bring a large pot of heavily salted water to a rolling boil. Add the pasta and cook until the ravioli are floating and the pasta is done. Drain well and serve sauced with side Parmesan.
Posted by randolph stainer at 9:26 AM