Eureka Springs, Arkansas has a long history for an Arkansas town. Much of it fascinates with true tales of bank robberies, grand hotels turned into crack pot healing asylums, and a 66 foot tall, mortar on mesh Christ of the Ozarks. Maybe the best explanation of Eureka is the fact the statue stands across the street from a men's nudist colony.

Holiday Island began as a planned retirement community (suburban improvement district) outside of Eureka Springs on the shores of Table Rock Lake in the early 1970's. Table Rock is one of the chain of lakes on the White River as it flows from a beginning near Fayetteville, Arkansas north into Missouri, then back south to an eventual meeting with the Arkansas River just before that river joins the Mississippi. Nowadays, the population of Holiday Island, around 2400 people, nearly equals that of Eureka Springs five miles away.

Although called an island, the development actually lies on a peninsula created by the junction of Leatherwood Creek with the White River channel. The community lies at the point where the river changes to lake at the upper end of the nearly 70 mile long lake. Around 7 miles upstream, the river flows out of Beaver dam, the uppermost damming on the White River. Just before the river reaches Holiday Island, it flows through the small town of Beaver, Arkansas. That town, the source of the dam and lake name, formed when workers began to quarry limestone from the banks of the then undammed river for the building of the Crescent Hotel in Eureka Springs.

In the picture above you can see the remains of the rail bridge at Beaver. That line carried the quarried stone into town and later carried the tourists visiting the destination hotel and the supposedly healing springs. On the bluff above the abandoned bridge note the glitzy bed and breakfast built for modern day tourist trade.

This picture shows the world's longest remaining one lane wooden suspension bridge. This bridge connects the town of Beaver by road to Holiday Island and Eureka Springs. The bridge was featured in the movie Elizabethtown. 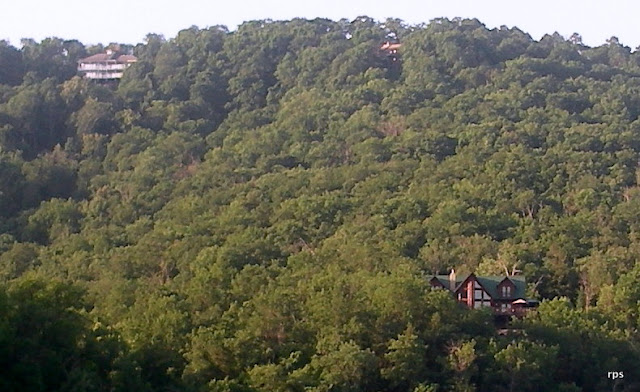 This picture is just upstream from Beaver and shows the "modest" homes people are beginning to build along the high banks of the river.

The first concrete bridge over the White River to connect Eureka Springs to civilization ran on these spans on old Highway 62.  That road was replaced with a wider and straighter 62 shown below. 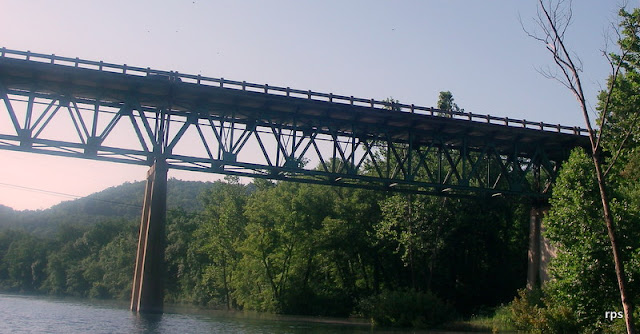 Last in this essay on Holiday Island is a sight I enjoy every time I come upon it. Before Holiday Island was Holiday Island, a large family farm covered the peninsula for many years. That family created their own family grave site. The developers had the good sense not to disturb the graves and left the fenced plot. The grave yard sits on the edge of the lake and many mornings I ease the boat up to the shore to fish a good little hole that sits near by. The sight below shows a common occurrence. Buzzards are gathered in the grave yard, sitting on the stones or the fencing. I often wonder at their discussion. 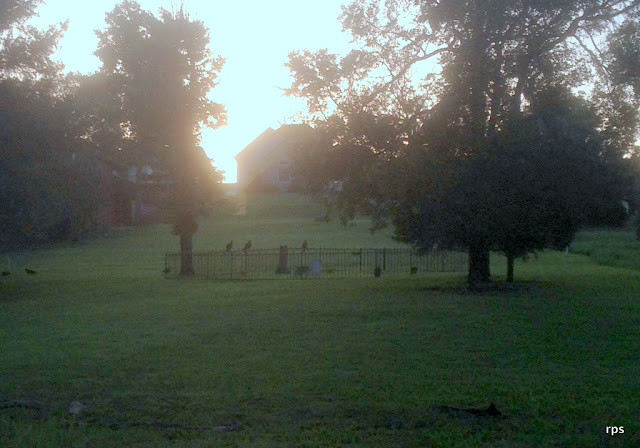 Posted by randolph stainer at 9:17 AM